Samsung Semiconductor's business aims to achieve excellence as a long life, energy saving and eco-friendly light source supplier in displays and lighting applications. Samsung's advanced semiconductor manufacturing expertise serves as a strong foundation to deliver state-of-the-art LED devices. Samsung offers LED based lighting solutions in the form of back light units in display panels, exterior and dashboard lighting in automotives, lighting packages and engines with and without integrated optics, and drivers. Samsung Electronics Co., Ltd. is a South Korean multinational electronics corporation located in the Yeongtong District of Suwon. Samsung is a key producer of electronic components for Apple, Sony, HTC, and Nokia, including lithium-ion batteries, semiconductors, image sensors, camera modules, and screens. Since 2006, Samsung has been the world's largest television manufacturer, and from 2011 through 2021, it has been the world's leading mobile phone manufacturer.

Samsung is a key producer of electronic components for Apple, Sony, HTC, and Nokia, including lithium-ion batteries, semiconductors, image sensors, camera modules, and screens. It is the world's largest manufacturer of mobile phones and smartphones, with to the success of the Samsung Galaxy brand of devices, which began with the original Samsung Solstice. The corporation is also a big seller of tablets, particularly its  Android -powered Samsung Galaxy Tab line, and is credited with pioneering the phablet market with its Samsung Galaxy Note line of smartphones. It has also created 5G-capable smartphones, like the  Galaxy S21 , as well as foldable phones, such as the  Galaxy Z Fold  3.

The LPDDR5X solution will broaden the use of high-performance, low-power memory beyond smartphones to AI and edge applications 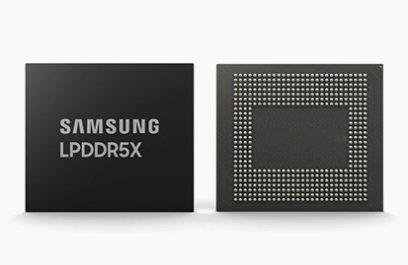 Samsung Electronics, the world leader in advanced memory technology, announced today that it has developed the industry's first 14-nanometer (nm) based 16-gigabit (Gb) Low Power Double Data Rate 5X (LPDDR5X) DRAM, which is designed to drive further growth across high-speed data service applications such as 5G, AI, and the metaverse.

"Hyperconnected market areas such as AI, augmented reality (AR), and the metaverse, which rely on highly fast large-scale data processing, have been quickly developing in recent years," stated SangJoon Hwang, Senior Vice President and Head of Samsung Electronics' DRAM Design Team. "Our LPDDR5X will expand the usage of high-performance, low-power memory beyond smartphones, bringing new capabilities to AI-based edge applications such as servers and even autos," says the company.

Samsung's LPDDR5X is a next-generation mobile DRAM that improves speed, capacity, and power efficiency for future 5G  applications. Samsung introduced the industry's first 8GB LPDDR5 DRAM in 2018, and the company is now aggressively expanding beyond mobile markets with the introduction of the first 16GB LPDDR5X  DRAM.

The LPDDR5X DRAM will have data processing capabilities of up to 8.5 gigabits per second (Gbps), which is more than 1.3 times quicker than the 6.4 Gbps of LPDDR5. It will utilize roughly 20% less power than LPDDR5 memory, thanks to the industry's most sophisticated 14nm DRAM production technology. Furthermore, the 16GB LPDDR5X  chip will support up to 64 gigabytes (GB) per memory package, meeting the growing global need for higher-capacity mobile DRAM.

2. Where are Samsung Semiconductors made?

3. How many factories does Samsung have in China?